WVU to honor School of Pharmacy alumnus during halftime of WVU vs. Texas Tech football game

The WVU Alumni Association will honor individuals who truly embody what it means to be a Mountaineer— the winners of the 2021 West Virginia University Homecoming and Alumni Service Awards— over a weekend of festivities that also celebrates the accomplishments of alumni around the globe.

Elaine McMillion Sheldon (’09) will serve as the Grand Marshal for the 2021 Homecoming Parade scheduled for Friday (Oct. 1) at 6:30 p.m. on High Street in Morgantown. During her time as a WVU student, Sheldon was a founding member of the “WVUncovered” program, a member of the Order of Augusta, and a contributor to U92 and the Daily Athenaeum. An Academy Award-nominated and Peabody-winning documentary filmmaker, Sheldon has been nominated for six Emmy awards. In addition, she is a 2021 Creative Capital Awardee, a 2021 Livingston Award Finalist, and a 2020 John Simon Guggenheim Fellow. She’s currently in production on a feature-length documentary “King Coal” and serving as an assistant professor of Cinema Studies at the University of Tennessee’s School of Art.

Dr. Gabrielle St. Léger (’01, ’01, ’12) will be honored as the 2021 Outstanding Alumna. St. Léger serves as the Vice President for Student Development and Campus Life at La Salle University, a role that culminates her lifelong commitment to developing healthy, diverse and inclusive college campuses through intentional student affairs support. During her time at WVU, St Léger was a member of the women’s track and field team as well as Zeta Phi Beta, Golden Key, Gamma Beta Phi, and Sigma Tau Delta. She was influential in supporting the growth of the PASSKEY program, and she was the first WVU scholar in the NASPA Minority Undergraduate Fellows Program. In 2018, St. Léger was recognized nationally by the Association of College Personnel Administrators as a Diamond Honoree and in 2021, was appointed to serve on the WVU Alumni Association Board of Directors.

The David W. Jacobs Lifetime Service Award will be awarded to Jules “Jay” Jacobs (‘58). Jacobs, a lifelong Mountaineer, Morgantown native, and College of Physical Activity and Sport Sciences graduate, played on the men’s basketball team alongside Jerry West and Willie Akers winning the Southern Conference Championship in 1958. His love for the sport led him to a career in coaching and academic administration while continuing to serve as an on-air basketball analyst, writer, and live commentator. In these capacities and in every aspect of life, Jacobs has continued to elevate and support West Virginia University and the Mountaineers.

Samantha Joneswood (’18, ‘20) will receive the Margaret Buchanan Cole Young Alumni Award in recognition of her continued servant leadership on behalf of multiple WVU Alumni Association chapters, the John Chambers College of Business and Economics, and the Reed College of Media. As a student, Joneswood was involved with WVU PRSSA, the American Marketing Association, and the Student Alumni Association while also serving as a Student Ambassador. Joneswood’s career has led her to Knoxville, Tennessee, where she works for HGTV and actively volunteers with the Smoky Mountain Chapter of the WVU Alumni Association. 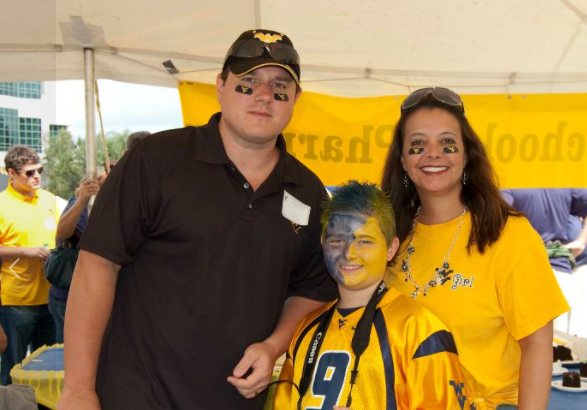 children about medical safety, educating the community about opioids as a member of DEA360, and developing free and accessible personal drug disposal systems, Massey has left a positive impact on his community as the Director of Pharmacy Operations and Clinical Services at Fruth Pharmacy. In 2020, Massey established a partnership with the West Virginia National Guard and the Joint Inter-Agency Task Force to enact safeguard initiatives for pharmacists to help reduce the spread of COVID-19. He went above and beyond, spending countless evenings after-hours traveling to immunize in nursing homes and rural communities.

Mike Manley (’72, ’74) will receive the Paul B. “Buck” Martin Award. During his time at WVU, Manley worked for the Department of Theoretical and Applied Mechanics, the Mechanical Engineering Department, the Library, WVU/WVNET, and the President's Office as its first Administrative Systems Specialist and Unit Coordinator of the Administrative Information Group. Manley is widely considered to be a pioneer of information technology in the state, and he has been regularly tapped to serve on commissions and advisory boards in this capacity. Manley formed Software Systems, Inc., in Morgantown and he continues to lead the company today. Manley is a steadfast volunteer and supporter of the Benjamin M. Statler College of Engineering and Mineral Resources and WVU.

The John F. Nicholas Jr. Award will recognize Margaret R. Phillips (’75, ‘77) and Rod Phillips (‘75) of the WVU Alumni & Friends Palmetto Chapter in Hilton Head, South Carolina. The Phillips retired to South Carolina in 2014 and launched a new WVU Alumni Chapter. Since then, the Palmetto Chapter has supported student scholarships, provided yearly donations to local charities, and created opportunities for its members to connect with each other and with WVU. Prior to their retirements, Margaret served as chief of staff to President David C. Hardesty, Jr. for six years and later as vice president for human resources; Rod is a retired member of the senior management team at The Dominion Post, where he led the newspaper’s circulation and marketing departments. They have two sons, both graduates of WVU, and are thankful their sons were raised in a University environment where they were able to experience the numerous opportunities WVU has to offer.

Awardees will be recognized at the Homecoming parade and during halftime of the WVU vs. Texas Tech football game on Saturday (Oct. 2).

Giving it their best shot